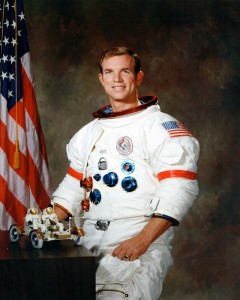 Graduate of the USAF Experimental Test Pilots School and the Aerospace Research Pilot School at Edwards AFB, California
Upon selection by NASA, assigned to Mission Planning, Guidance & Navigation for Gemini.

1966, Pilot of Gemini 8, the first mission to perform a manned docking in space.

1969, CMP of Apollo 9, the first test of the entire Apollo spacecraft system. Performed a stand-up EVA from the Apollo CM hatch.

1971, CDR of Apollo 15, the first lunar landing among the mountains of the moon. Performed one stand-up EVA from the top of the lunar module and three surface EVA’s, including the first use of the LRV(Lunar Roving Vehicle).

1972, named Technical Assistant to the Apollo Program Manager at the Johnson Space Center.

1974-75, Special Assistant for Mission Operations for the Apollo-Soyuz Test Project.

Retired from the USAF in March 1975 and named Director of the Dryden Flight Research Center at Edwards AFB, California until his retirement from NASA in October 1977.

“Man must explore, and this is exploration at it’s greatest.” 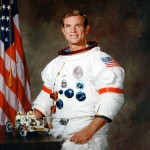