From 1947 to 1959 Schirra was a US Navy fighter pilot, Operations Officer and test pilot.

Flew 90 combat missions in Korea as and exchange pilot with the US Air Force.

Took part in the development of the Sidewinder air to air missile.

December 1965, Command Pilot of the first spacecraft to rendezvous with another manned vehicle.

After NASA, became a guest commentator with Walter Cronkite on CBS coverage of Apollo missions.

Board member and Director of a multitude of companies in the ensuing years. 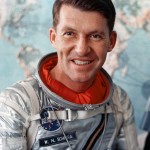