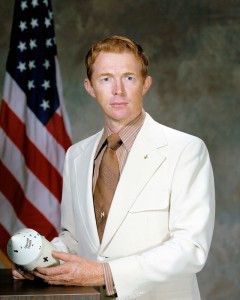 Joined USAF in 1953 graduating from the Aviation Cadet Program at Williams AFB, Arizona.

1953-1955, Chief of Service Engineering at Tachikawa Air Base in Japan.

1965, Graduated USAF Aerospace Research Pilot School and was assigned as an experimental test pilot at Edwards AFB, California until his selection by NASA.

November 1966, became the only member of his 1966 astronaut class to be assigned in the Gemini program when he acted as Capcom for the Gemini 12 mission.

January-February 1971, Command Module pilot for the Apollo 14 mission, assisting in the successful landing at the Fra Mauro highlands originally planned for the aborted Apollo 13 flight.

1981 until his death in 1994, owner and President of Gulf Coast Coors Inc., Gulfport, Mississippi. Attained his Coors dealership through his association with his Apollo 14 CDR Alan Shepard who was a senior executive of the Coors Brewing Co. 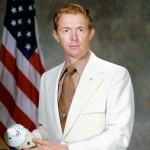