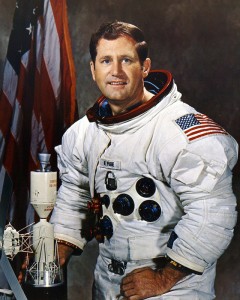 After returning to University and recieving Masters degree became Assistant Professor of Mathematics at the USAF Academy, Colorado Springs, Colorado, 1960-1963.

1973-1974, Command Module Pilot on the last, and longest, Skylab mission, establishing a duration record he shared with his crewmates Gerald Carr and Ed Gibson, until the advent of the Shuttle-Mir series of flights in the 1990’s.

Left NASA to pursue a career as a consultant to aerospace and energy companies.

Worked with Boeing in support of the space station “Freedom” project.

From September 1987 to February 1988, worked with NASA’s Office of Exploration on robot concepts for future Mars missions.

In May 1989, concluded a two year study on developing requirements for EVA for Earth orbit and Lunar, Mars and Phobos surfaces.

Author, “How Do You Go to the Bathroom in Space”, 1974 and “The Trikon Deception”, a collaborative Science Fiction novel with noted SF author Ben Bova, 1994. 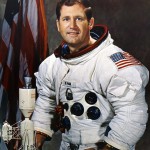