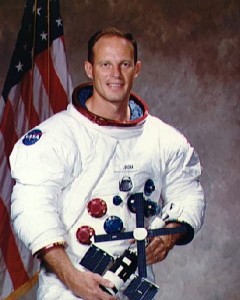 Joined the US Marine Corps in 1959 and earned his wings in 1960 at the US Naval Air Training Command.

Prior to selection by NASA, assigned to the 1st Marine Air Wing as an attack pilot in Japan.

March 1982, CDR of the STS 3 mission, the third orbital test flight of the Space Shuttle Columbia.

Retired from NASA and the USMC in October 1983 to enter private industry later making one unsuccessful bid for the United States Senate.