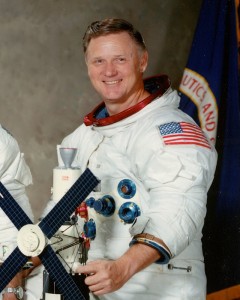 Served in the US Naval Reserve earning his wings in 1957.

Prior to selection by NASA, worked as a Space Physicist at NASA Goddard Space Flight Center.

Following the Skylab program, took a leave of abscence from NASA to perform post doctoral work at the University of Alaska Geophysical Institute(1974-75).

Returned to NASA as a member of the Operations-Missions Development Group at the Johnson Space Center developing payloads for the Space Shuttle Orbital Test Flight Missions.

19 years after his selection he entered space as a Mission Specialist aboard Challenger during STS-51B.

Retired on the 20th anniversary of his selection.

From 1986, Professor of Physics at Utah State University.