Apollo 13
April 11-17, 1970
Assignment: Lunar Module Pilot
Flight Duration: 5 days, 22 hours, 54 minutes
Note: The moon landing was aborted due to an explosion in the service module, the crew returned safely to Earth. Haise would have been the 6th man to walk on the moon.

April 11-17, 1970, Lunar Module Pilot on the ill-fated Apollo 13 mission. He and crewmates Jim Lovell & Jack Swigert were forced to use their Lunar Module “Aquarius” as a lifeboat during a life and death struggle to return to Earth after an explosion in the Service Module of the CSM “Odyssey”.

April 1973 to January 1976, Technical Assistant to the Manager of the Space Shuttle Orbiter Project at Johnson Space Center, Houston, Texas.

June to October 1977, CDR of Crew 1 for the STS Approach & Landing Tests aboard the Space Shuttle “Enterprise” at Edwards AFB, California. 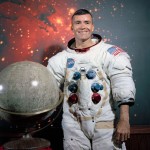