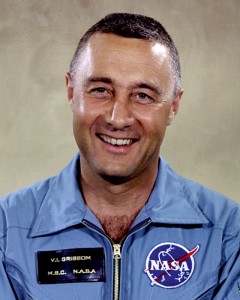 1957, assigned as test pilot, fighter branch, Wright-Patterson AFB where he worked until selected by NASA.

July 21, 1961, became the second American in space aboard the Mercury spacecraft Liberty Bell 7.

Gus Grissom died January 27, 1967, along with his crew of Edward H. White II and Roger B. Chaffee in the Apollo 1 fire at the Kennedy Space Center in Florida.

“If we die, we want people to accept it. We’re in a risky business, and we hope that if anything happens to us it will not delay the program. The conquest of space is worth the risk of life.”

– Gus Grissom, responding to a reporter, at a press conference
for the first manned Apollo mission.