Served as an Electronics Officer in the US Navy from 1952 to 1956 stationed aboard several destroyers.

Following his flight he served as Deputy Director and then Director of the Office of Science and Applications and then as the Assistant Director for Space and Life Sciences at JSC.

After leaving NASA, Garriott was the Vice-President of Space Programs for Teledyne Brown Engineering in Huntsville, Alabama.
Co-founder and President of Immutherapeutics Inc. in Hunstville.

On October 12, 2008, Owen Garriott’s son Richard launched aboard Soyuz TMA-13 to the International Space Station as a self-funded tourist, and returned to Earth 12 days later. This made the Garriott’s the first father and son astronauts. 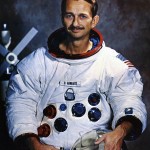