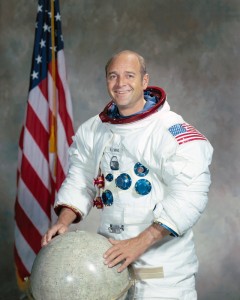 On sea duty in the Pacific flying off the aircraft carrier USS Ticonderoga during Vietnam Combat Operations for seven months before selection by NASA.

Apollo 17, Dec 7-19, 1972, CMP on the final Apollo mission to the moon. Performed NASA’s last deep space EVA to retrieve film canisters from the Scientific Instrument Module(SIM) Bay on the Service Module. Recovery of Apollo 17 was made by Evan’s old ship, the USS Ticonderoga.

Worked in the development of the Space Shuttle program as part of the operations training group, responsible for the launch and ascent phases of Shuttle missions.

Later formed his own consulting firm in Scottsdale.