Prior to selection by NASA, worked as a research scientist for the Rand Corporation.

October 1968, Lunar Module Pilot on Apollo 7, the first flight of the Apollo program where he and crewmates Wally Schirra and Donn Eisele performed the first test of the Apollo Command and Service Modules in an earth orbital flight.

November 1968. assigned as Chief of the Skylab Branch, Flight Crew Directorate, Johnson Space Center where he worked until retirement from NASA and the USMC.

Author of “The All-American Boys” in 1977, a book on his reminiscences on the human factor in the space program. 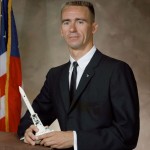